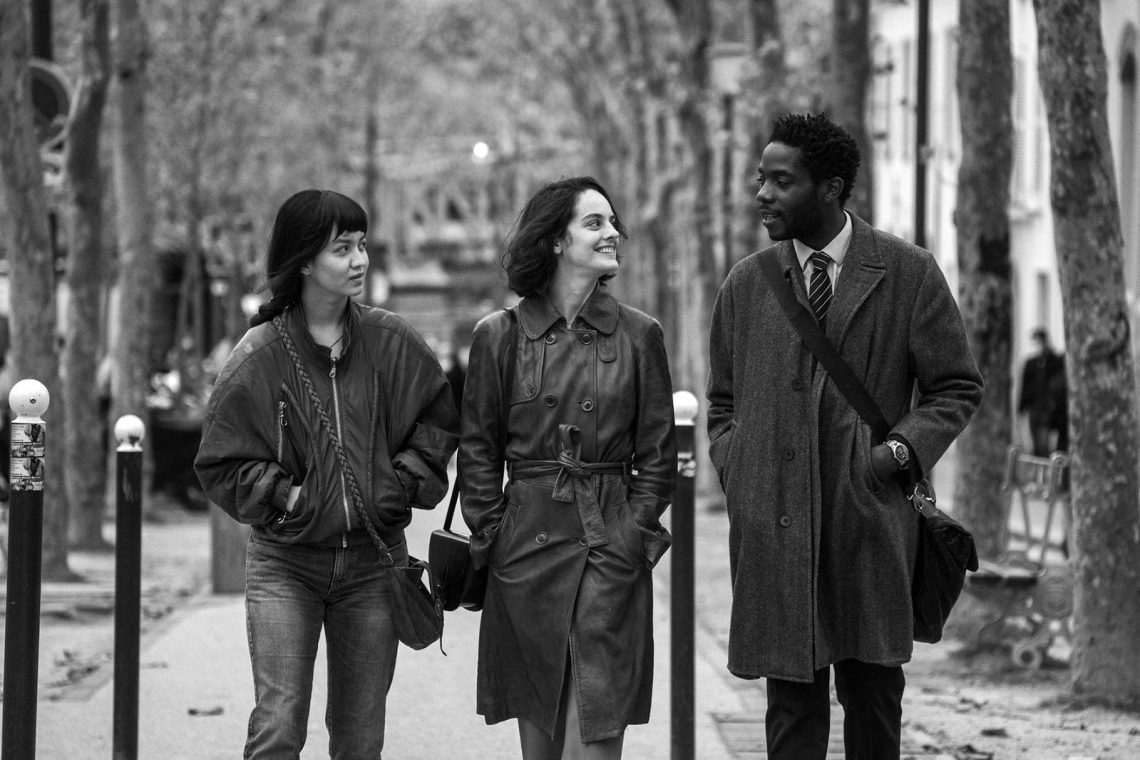 Jacques Audiard’s recent film is an electric modernist exploration of the little portrayed beauty of one of Paris’ most architecturally-industrial neighborhoods, to the piercing roar of vast synthetic, musical landscapes by Parisian electronic composer Rone. The aesthetic exploration of the 13th district of Paris, the Olympiades, gives a rare measure of the richness and charm of the reality of its diverse cultural and social dynamics, giving a glimpse of modernity in an uninhibited sincerity. Through sweeping shots of its singular skyline, Audiard brilliantly showcases the isolation of its inhabitants in this ample Parisian landscape, where towering rectangular skyscrapers lie sporadically interspersed. Through the depths of this labyrinthine space, we are gently introduced to closed spaces, welcomed into the sexuality of its denizens, the only authenticity we initially come to perceive. And it is through the unrestrained brutality of the exposition of sex and love, that we come to familiarize ourselves with our characters, as well as to all of their suppressed desires and ambitions.

The story revolves around three characters, which entangle themselves in a love triangle as complex as their repressed truths, a loneliness which they all bear but cannot share or communicate. We are first presented to Camille (Makita Samba), a charismatic teacher who reveals to us, in one of the opening scenes, that he “compensates his professional frustrations through intense sexual activity.” He comes to share an apartment with Émilie (Lucie Zhang), a young first-generation Chinese French woman, who feels bound to occupy the home of her Alzheimer-ridden grandmother who is slowly passing away in a hospital room. She has graduated from one of France’s most prestigious universities, but works in a call center. Finally, Nora (Noémie Merlant) has just moved from Bordeaux to resume her studies at the Sorbonne at the age of 32, with a troubled sexual history.

Individuals are shown estranged from their romantic partners and friends, but also families. In the multicultural 13th district, known as Paris’ Chinatown, the modern reality of dispersed families with parents returning in China, a sister living in London and a young Émilie living in Paris, reveals all its sentimentality and tragic despair when Émilie’s grandmother passes away, alone in her hospital bed. Émilie had made a deal with her room mate : she goes and visits her grandmother once a week in her place, for a lower monthly rent. Émilie reasons that because of her grandmother’s Alzheimer’s, the old woman wouldn’t know the difference. Émilie is fustigated by her sister and mother through the phone for not caring enough, but for her, the passing of her grandmother is a liberation from an apartment she realizes she doesn’t want to live in. Never once does she physically meet her sister and parents in the film. Estranged from the lovers of one-night stands, Audiard’s modern man is estranged from family as well.

The choice of filming in black and white is the occasion for Audiard to demonstrate his masterful control over light and darkness as characters find themselves enveloped and isolated within sheaths of white, composed by the blurred contours of the cityscape at noon, or drowning in the darkness which fills the dancefloor of a techno party between each thump of a monotonous beat. The languid techno beat characterizing the music in many of the party scenes starkly contrasts with the melodious but sizzling energy of Rone’s electronic tracks. This in turn, seems to insinuate a hint of confluent tomorrows between Man and its technology, if played out right. The characters, however, are further entrapped in light, by the squares within which they are shown to be living in, seen sitting on their sofas within their windows which, after a pan out, reveals them to be one of a million, in the most populated district of Paris. It is in these pan outs of individuals living within their dimly-lit windows, that the luminous contrasts are most poignant in their depiction of the immensity and overwhelming nature of the nocturnal urban environments we casually live in.

Audiard, however, does not conclude with this over-simplification of digital commodification. Digital sexuality in the film becomes an expression of true human emotions, as well as human touch and our attempts to try to get closer to one another. Through skype and video calls, Camille and Émilie flirt and glow from the heights of their separate apartments. Through a dating app, Émilie leaves her restaurant shift for half an hour of blissful sex with a complete stranger, and upon her return dances a theatrical and splendid valse through her restaurant, resuming her shift to the acclamation of customers. When she tells Camille about her use of dating apps, he responds to this confession with an admonition. And this reaction is perhaps what best represents how modern audiences feel about modern and digital love and sexuality and why they are so puzzling to us. It presents us with forms and codes of love never experienced in millennia of human history, leaving us confused and unsure about swiping, the synthetic hum of excessively tired computer fans or the strange metallic warmth of over-heated smartphones. Audiard seems to suggest that regardless of bewilderment before synthetic novelties, at heart it is the age-old combination of human emotion and hormones, and ultimately love and compassion which travel across these technologies.

Perhaps the grand manifestation of this, is Nora’s own quest for truth. Initially, traumatized by her assimilation to the cam girl, she curiously decides to contact the woman she is being compared to, gradually befriending her by chatting online. Perhaps searching to understand what a woman should do when sexually shamed and demeaned or perhaps simply to find a friend in her lonely world, she effectively breaks the barriers between the physical and digital world, which in the end are one and the same. Audiard ultimately leaves us with the sentiment, that despite the new technological appearances of the modern world, they are nevertheless the forms and pathways through which we express our unfiltered humanity.