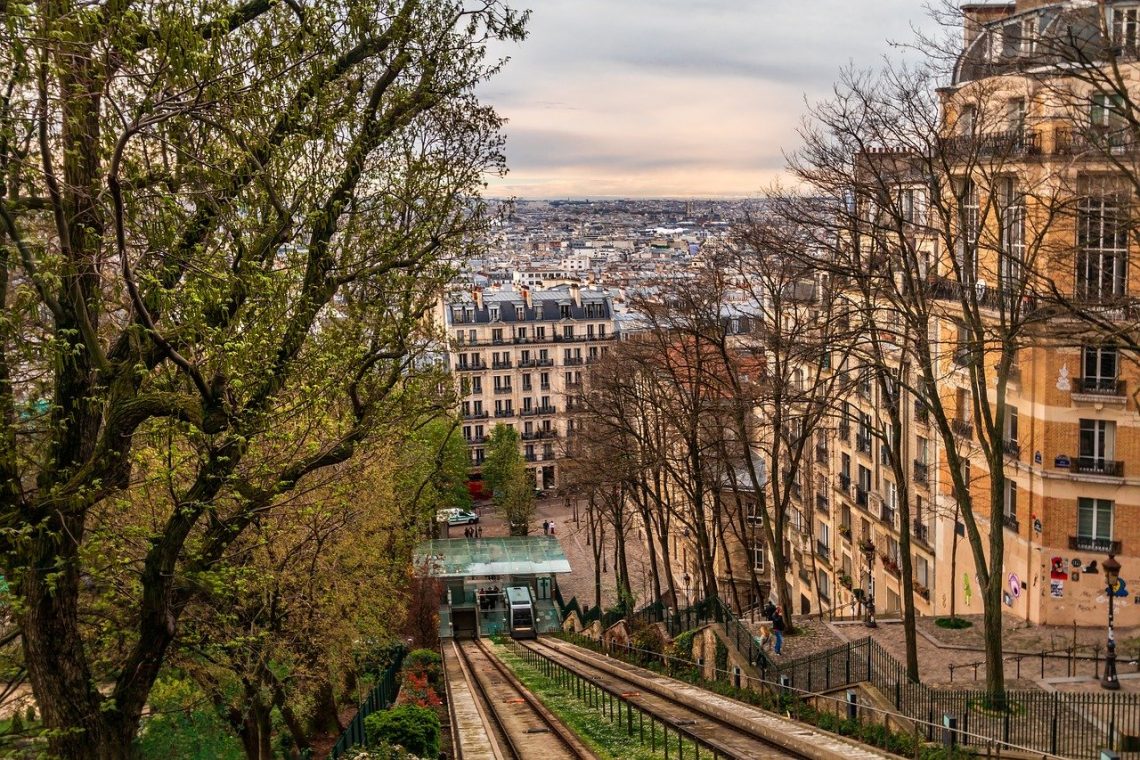 A green moleskin reverberates in the chest pocket of my jacket. From the corners of its walls up the bridges of its binding, black soot crawls on its green plains, walking unnoticed. It is terribly old. Like hopeless hands clinging to pictures pasted on their plain damp walls, my diary puts up a brave face in its waning life. In its slow death and decay, it assumes the age-old belief that no one notices its wounds, that its pain and heartbreak—lie in disguise, only to realise that it’s truly not a phenomenal task to uncover wounds concealed. Impervious though wounds may seem, they are visible to the world out there, as discernible as the pounding of one’s heart; as obvious as blue ink on white paper.

From the heights of Sacre Coeur down towards Rue des Saules, my legs carry me along a trail that seems, like my diary, to transcend time. Greystone cubicles engraved on the floor, with beige-toned houses sprouting along the steep of the hill, I breathe perfume in Paris. Gasping on the stairs towards the top, I breathe the scent of lovers ascending the heights of Sacre-Coeur. With their hearts rhyming the same beats and their hands clinging the same fingers, I smell hope in the bodies that look for excuses to touch. An unkempt stone stumbles the balance of the girl in the black overcoat. Her red hair slithers across as she tries to find her trail to end up in the arms of the guy with a newly-shaped crew cut. With smiles radiating under the light of their sun-kissed faces, they laugh. They rejoice at their own predictability, with relief subdued in their smiles. A relief that stones unkempt make bodies cling at last, they smile because these stones somehow never come to pass—in gratitude to mistakes engraved in time.

In my deliberate attempts to lose addresses in this city, I am enamoured by the faces that it houses. Beneath the rosemary spray of perfume diffusing along the lovers’ trail, in nooks and corners, by the alleys and beneath the benches, there lies another world. A world often too well hidden from their rose-tinted eyes. It smells of grief brimming with coffee gone cold. It is grief that I find, on crowded lanes and in moon-like eyes, staring back from cups of lukewarm coffee. In the faces of hopeless men waiting at cafe tables on this wide stretch, with dread in their hearts and fear on their lips, I see a love so fragile that it needs to be guarded. I see fear, longing and desperation—parting quivering lips, trembling ashen fingers—culminate in long-drawn breaths of cigarette smoke; one heavier than the other. I understand them, perhaps now more than ever, with their eyes fixated on their phones, in anticipation of rings they’d never know, and with their ears hoping to hear their name spring up from conversations afore, they live somewhere between dreams and reality, a world where memory deceives and hope enslaves—them and their beautiful minds.

As I walk past them, my orange bag-pack stashed with James Baldwin’s Collected Works, I am reminded of a verse by Faiz, a poet who I had forgotten back home.

You have seen the countenance that has lain my life in ruins.

You understand, I know, for those magical eyes have ruined you too

Addressing his poem to his rival in love, Faiz claimed that only he could understand him for they were together in their countenance; in their ruin, they were perhaps consoled by their collective misery. The eyes, and the glances that had slain each of them, as they hoped, equally. And so when I walk beside him and our eyes meet, me with my Moleskine beating impulsively against my chest pocket and him greasing his meek fingers against the round table, we know that somewhere between his cold coffee and my dried-up pen, we have shared way more than words can tell.

Today, moved by the gentle winds seeping through my jacket, I do not feel alone. In 1948, 70 years before me, James Baldwin had walked alongside the same streets, perhaps as clueless, if not more, than I am. Like me, he too, had turned his back on his society only to realise that the bonds of history are way more than what our suitcases could carry, that the baggage of our living terrors was, and still is, carried in the conflictions of our mind—day in and day out. And precisely when our minds had become an everyday plebiscite between my name and the name they chose for me, the tremendous task was, back then, as it remains today, to make a name of my own; as my own individual right.

“The years I lived in Paris did one thing for me. They released me from that particular social terror, which was not the paranoia of my own mind, but a real social danger, visible in the face of every cop, every boss, everybody”

I hear words where there are none, and footsteps resonate in absolute silence. I feel the warmth of another beside me. Down by Rue des Saules, I take a right only to end up in one of those sections of Paris which seem to be a world of its own. Two large dusted buildings appear dull against strings of chromatic triangular flags hanging from its body—blue, yellow and white, fluttering now and again with the inescapable Paris wind. There is no sun. Puddles of water reflect the grey of the sky above, misted by reflections of window panes, and damp-flood lights. Three guys and a girl, with baggy sweatshirts and ripped jeans, accompanied by thuds of French rap music, are sitting in the corners of this flat-square world. The guy with blond hair in a blue sweatshirt, with the face of a boy and the body of a man, dribbles a football, while the others continue their conversation. The guys talk while the girl smokes her cigarette. Holding it between the crevices of her bony fingers, she breathes a song in my head. We are walking.

Down the foggy ruins of time

Far past the frozen leaves,

Out to the windy beach

Far from the twisted reach of crazy sorrows

I walk only to end up at the crossroads of what seems to be a trivial decision. Two men stand at the opening of a stairway. Leaning against the wall, in a red high-necked sweater with his black hair tied up in a bun, the man rolls a blunt, its shape pompously glaring the mastery of his craft while the other dangles like a pendulum talking in the middle of what seems to be a merry conversation. It’s a moment I want to hold in time, save it in a bottle, and relive it in moments when time is perhaps the only thing I need. I want to picture it but given the legal lines between imagination and stalking, I come to reason. Besides, I also need to reach the metro station.

Metros in Paris are small boxes of quiet desperation. As I buy an overly expensive ticket towards Jardin du Luxembourg, I feel the dead of this city in these white walls and ticket counters. In these long stretched panels of meaningless hoardings and in the occasionally prostrating man with cents showering down his cup of apathy, I feel that I cannot live here. This city, with its total freedom, is an occasional terror, diluted by the beauty of its architecture and the seclusion of its streets. This city, with its subways, is changing seats and occasionally making eye contact with terribly tired eyes, staring at the hollow glass-panes beside them. Standing in this moving box of steel and glass, where the drunk laugh and beggars cry, and the people come and go, I ask myself if life is just a series of groupings and re-groupings or perhaps there is more to us. As I sit beside what seems to be a father and a son, I feel that I do not need to know this language to feel the depth of its people. Perhaps, the beauty is that I can only see them carrying out the saying of their hearts. The child hits the hand of his father, a game in which he is going to get a tight hug if he is caught. I want him to be caught, almost frantically, before my station arrives. The break screeches and a plethora of blank eyes stare at us through the glass panels outside, I walk away smiling, carrying with me the musings of a child’s laugh.

There, on a cold green chair in Jardin du Luxembourg, I stare at the long stretch of sculptures and men. The sun is shy and the wind is rash, and the runners often break the silence in between. I am reading Baldwin, rather I feel that he is reading me, almost coercively. I feel the unease in my heart; in my twists and turns, I convince myself that it is the chair, the weather, the wind or perhaps the annoying tourists next to me. But in my heart of hearts, I know that it is him, with his skewed white teeth and his curly black hair, he tells me things I do not wish to know. He is not a good friend, but perhaps the only one I have. He tells me about his trips to Cafe de Flore, amongst carnations, lilies and a cup of coffee and he talks to me about life in Paris. But more importantly, sitting on the green chair beside me in a jet-black high necked sweater with his silver chain dangling down his neck, he tells me, with all the sincerity in his protruding black eyes, that a phenomenal task in life will be to become true to myself. To somehow create a name of my own in a country where nobody’s my name. In this collage of undocumented misfortunes, to somehow feel my own pain and acknowledge it as it is. To know this terror in my entirety and not become bitter, not hate and yet not be complacent to the oppressor’s hand. As I close my book, he walks away wishing me all the luck in the world, and God knows that I need it, on this sunny afternoon in Paris.