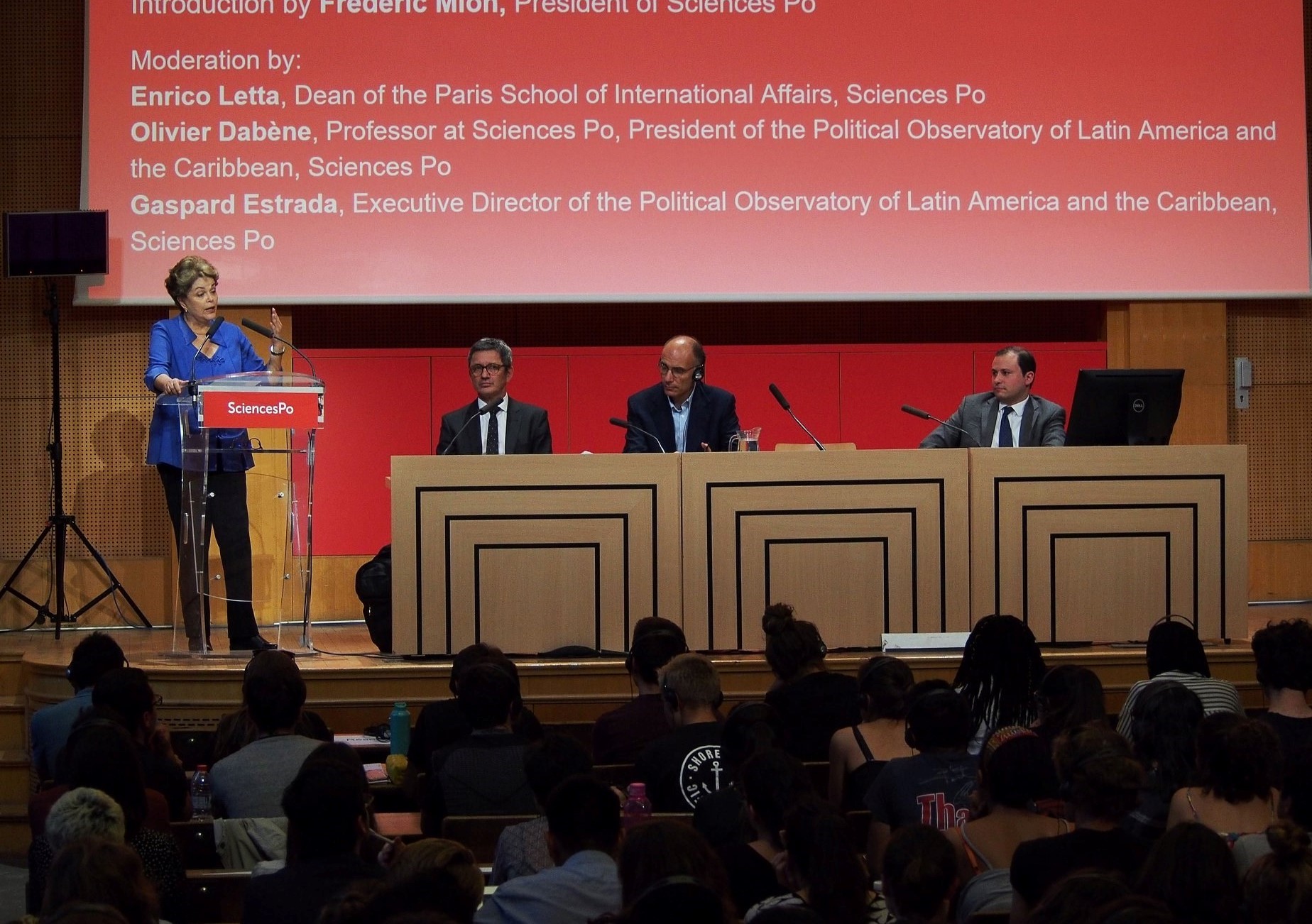 Copacabana, Maracana, Samba and coffee. When we hear those 4 words it comes to our minds in one second that someone is talking about Brazil. On the one hand we start to think about the biggest industry in South America and one of the BRICS countries, with immense potential to develop and become one of the most influential state in the world. On the other hand, we remind ourselves that this is a state with a history of 350 years of slavery, and which was the last in the world to abolish it. A country with grinding poverty, stuck in crisis. But we can also surely say that this “crisis” can now also be found in a majority of countries located south of the US, such a majority that we may now talk of a “crisis in Latin America”.

And that precisely was the theme of the conference which took place at Sciences Po Paris on September 16. “The democratic crisis in Latin America and the world” was a stupendous event in our university, which had the honour of receiving the former president of Brazil, Dilma Rousseff.

A woman who Forbes placed in the 2nd position, just behind Angela Merkel, in the ranking of the most influential women in the world in 2013. A woman, who broke the magical, anti-feminist glass ceiling and became the first female president in the history of Brazil. And finally, a woman who tried to develop her own country and fought for democracy persistently, despite all the hardships she faced in her life.

It was both an honour and a pleasure to listen to Rousseff, who in her speech touched multiple important subjects. She started by telling us about the history of democracy in Brazil, to show how liberal and anti-democratic views had grown with time and finally reached their apogee at the beginning of the 21st century , before conflicting again, with doubled strength, in 2014 when a huge crisis broke out in the country of Samba. An irregular labour market, food and oil prices increases all contributed to make that topic one of the hottest in international media at that time. The hottest in a negative way, unfortunately.

“Brazil is going to quit against today’s flow of inequality which we can see in Europe and the USA. Brazil will intend to oppose it”. Another hot topic Rousseff evoked was the current issue of asymmetry in equality in the world. She is convinced that everyone should have access to social help and adequate retirement. Inappropriate wages and lack of care for society can lead to crisis, such as the one Rousseff already fought in 2014.

When she was president, Brazil started to cooperate with Africa more. ”We have the biggest black population outside of Africa. We should remember it”. Fixing a minimal wage and improving the labour market for black inhabitants were positive milestones, which were begun by Lula and continued by Rousseff. According to the former Brazilian president, it is impossible to make proper social policy in Brazil without thinking about the black population.

Then, in her speech she put emphasis on today’s realities and the challenges associated with it. Students heard that if a country is willing to develop and grow, it needs new technology and education. According to her, those two matters are the key to a progressing country. An educated society leads to improvements in the state’s industry and promotes the country in the world.

Returning to the initial thought about “the flow”, she mentioned Trump’s and Macron’s policies. She did not agree with the assumption which claims that “Trump is a new light”. She also criticized Macron’s policies in French Guiana when it comes to environmental issues. After talking about Macron, she touched the day’s hot topic – the Amazon. She insisted that Bolsonaro’s policies were at odds with the appropriate future for the Amazon : “What is happening with the Amazon?! There is a multitude of deregulations!”. She argued in a powerful way that the current policy in Brazil was not neo-liberalism, but neo-fascism.

She then evoked the motto of the country: “Ordem e Progesso” which means “Order and Progress” and is seen on the Brazilian flag. A country with the 6th largest financial reserve in the world, and the 9th biggest economy is certainly a state which is able to maximize its potential. Growing companies and opening to foreign markets are decisions which are bringing Brazil to Progress. Efforts for democracy can bring peace and Order in this huge, South American country.

On September 16th, Sciences Po’s auditorium was completely full. Future politicians, economists and diplomats were absorbed in the former President’s speech. Dilma Rousseff touched topics which concern the whole world, in a direct and powerful way which left us all astonished.