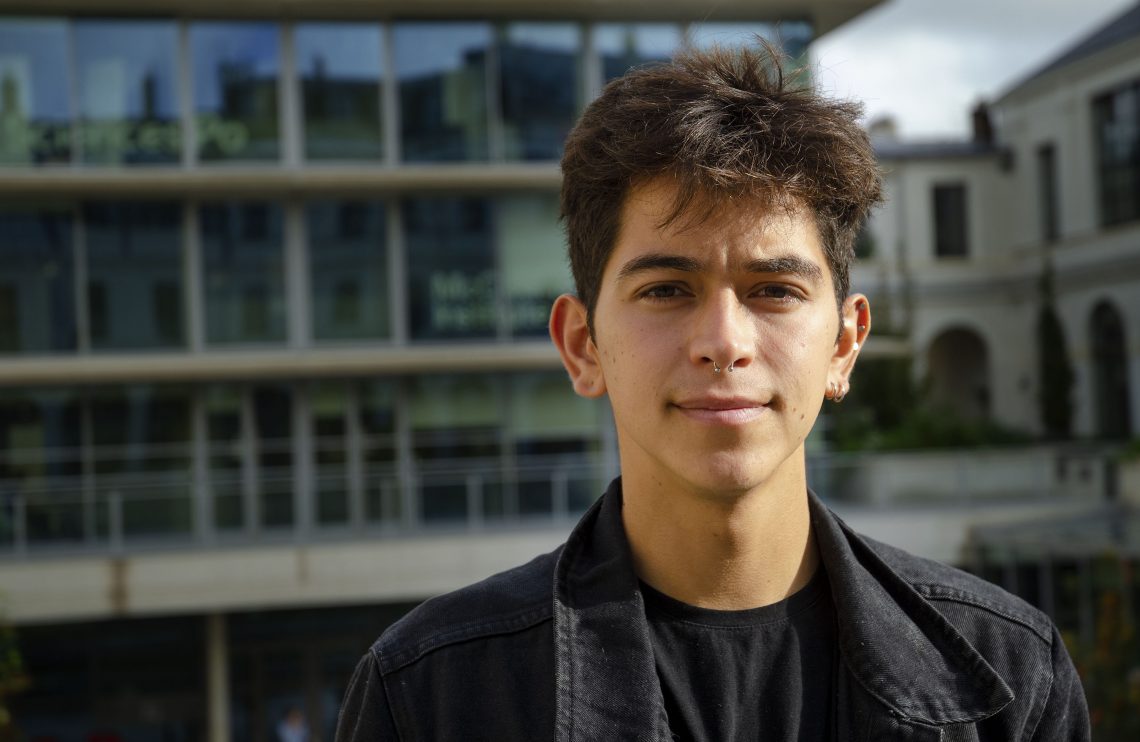 Chile’s recent student-led revolution is a beacon of hope in a continent shaken by political and economic turmoil. And Icaro Darío Núñez Ruiz has been a leading voice for that movement from the very start, since he was just 16 years old. A student and activist from Valparaiso who is now studying politics and governance at Sciences Po, Núñez provides first-hand insight from the protest’s frontlines.

“It was my birthday. I was having tacos with my friends. And seeing everything getting burned,” Núñez recalled, thinking back on how the demonstrations began in 2019. “We said, ‘Okay we’ll eat – and then we will go,’ ”And we ended up protesting for over 2 months.”

Icaro Darío Núñez Ruiz and fellow students formed the backbone of  the  Estallido Social, Chile’s massive uprising that began three years ago. Ultimately activists catapulted one of their own, the most influential figure of the movement, Gabriel Boric, to Chile’s presidency last March. They also secured a vote to change Chile’s constitution, a controversial process that is still ongoing. I met with Núñez on a rainy Paris morning to discuss his thoughts on his country’s past and future, three years after those historic days.

Núñez, first-rate witness to the beginnings of the Estallido Social

The spark that set the protests off, he told me, was an outcry over metro fares. But it grew into a nationwide movement, demanding a rewrite of the nation’s constitution. Looming behind it were authoritarian era provisions that had created staggering inequality, a wide opportunity gap, and left Chileans struggling to meet basic needs.

Tattooed and flashing an infectious smile, the 23 year old reminisced about the early idealism of the protests. He also spoke highly of his time in France and the political discourse at Sciences Po. He’s the sort of person that loves to debate. “One of my first days in Paris we went to a bar with some guys and ended up having a two hour discussion about the marketplace of ideas,” he told me. “Everyone is so open to discussing anything.”

His journey to France began when, as he put it, “My parents wanted me to study a language that wasn’t English.” No one in his family spoke French, but the French school was located close to his house. So the French school it was.

But getting to Sciences Po was not a simple dream to realize. “At first, I planned everything to be able to come here. But then, the social uprisings started. So I canceled everything and I stayed. It was my patriotic duty. I needed to be there. Then I tried to do it the next year and the pandemic started,” he said. “So here I am in my last year at university.”

The deep issues of the mobilization

Núñez was disappointed that when Chileans went to the polls last September, they  didn’t vote to accept a proposed rewrite of the country’s constitution. He described how the current constitution’s flaws are rooted in Augusto Pinochet’s dictatorship. For decades, he said, it has safeguarded many of the despot’s signature neoliberal ideas, embedding them into the framework of Chile’s economy.

He reminisced about how the Estallido Social brought Chileans from all walks of life to the streets. “People brought their families … I went to march with my sister, and my mother. Grandmothers were there – with casseroles.” Banging spoons against cooking pots was a signature of those times, a form of protest known as cacerolazos. He said he was surprised how different people were all swept up in the wave. “People you would see and think, it’s impossible that this person is here. And yet there she was protesting. I remember the feeling was complete excitement. Everyone was out for the same reasons, everyone was fed up. You had the feeling like you were on the edge of something really big that you can’t really measure.”

Núñez described an historic march from Vina Del Mar to Valparaiso. “I remember seeing hundreds of people, thousands. Kids, old people, young people, everyone. People with football jerseys, hippies, people looking like anarchists. It was a mixture of Chilean society marching all together.”  It too was a personal moment for him. “To be from the left wing, traditionally, in Chile is to feel lost and alone, to feel you don’t really connect with other people. But at that moment I didn’t feel alone anymore.”

As the protests began, Núñez remembered a friend calling him from Santiago to say, “It’s all on fire!” Some violent clashes did occur. Damage estimates range as high as $3 billion. “It’s a lot of money,” Núñez said. “But it’s still less than the last three big (police and military) frauds in the decade.” The majority of protesters were peaceful, he said, adding that the ugly moments, the violence and destruction of property shouldn’t be ignored.

Núñez explained how Chile’s institutions aren’t functioning as they should because privatization is ingrained in the Chilean economy. It leaves many Chilean citizens struggling with basic needs such as education, health care and water. It exacerbates wealth and opportunity inequality, he noted, adding, “As the private sector became more prominent in healthcare, the public sector at the same time was getting worse and worse. The father of a friend died on the waiting list for cancer treatment. He couldn’t get it in time.”

Water is also a highly privatized resource in Chile, as Núñez discovered when writing his university thesis on rivers. The Chilean city of Petorca offered a striking example. Private avocado farms there thrive, while locals struggle to meet their fresh water needs. “The state grants real rights over water. You now have more rights granted on water than the rivers can give. So rivers are getting sick, or completely dry, he said. ”In Petorca, he explained, “residents have to wait for fresh water to arrive by truck.” At the same time, fresh avocados leave Petorca by truck daily, to be exported to customers around the world.  During the pandemic, residents of Petorca didn’t have water to wash their hands. The new draft of the constitution would have addressed privatization head on, strictly limiting water concessions.

The reasons for the failure of constitutional reform

Núñez believes the draft constitution was rejected in part because it tried to move too fast in some of the changes it proposed. He also noted another factor in its ultimate demise was the disinformation that infused Chileans’ social media feeds in the weeks leading up to the vote. He says the rechazo (vote against) narrative suggested that a new constitution would turn Chile’s economy into a version of Venezuela’s now impoverished state. People, he said, voted against the constitutions out of unfounded fear of losing their home and savings. He also blamed what he called Chile’s “hegemonized right-wing mass media, television and newspapers.” He told me, “On television, you only really have right-wing channels. So people will tell lies on television and no one can stop them. We have to create our own media.”

The promising legacy of this unprecedented mobilization

Although Núñez is discouraged by the recent vote, he said the art and music the Estallido Social created will live on. Protestors could be heard singing and remixing the classic protest hymn El Derecho De Vivir en Paz. “You had these very emotional images (at the protests) of people getting shot with tear gas bombs, as people played this song in the background. A lot of Chilean artists made remakes. But I prefer the original version.”

The lasting legacy of the movement, according to Núñez, is the presidency of Gabriel Boric. But Núñez is no longer as impressed as he once was with his nation’s new leader. Boric’s presidency and its shortcomings raise complex issues for many young Chileans like him.  When asked if he saw Boric today as the embodiment of Chile’s continuing movement for social change, Núñez responded that Boric, “was one of the leaders, but I never saw him as the face of the movement. The movement was really something organic, something that was not centrally organized. If you ask me to put a face to the movement, I would probably say Gustavo Gatica, or Fabiola Campillai, the protestors who literally lost their eyes to police brutality.”

Núñez said he hopes that historians will look back at this moment in Chile, and see the beginning of a new constitutional era for his country. He told me ideally the Chilean people will agree to a second constitutional referendum and he pointed to moments in history when other nations including post-World War II France required more than one round of voting and multiple rewrites to create a lasting constitution.

Núñez said that the charismatic, poetry-quoting Boric rode a wave of support from young people to the presidency. He said he hopes the governing coalition can still  deliver for all Chileans. “You now see these people without suits in Congress, raising their voices for subjects and things that actually matter to young people.” And while Núñez believes the vote to reject a rewrite of Chile’s constitution was a major setback for the new leader, he acknowledged that at the moment Chile has “a structural crisis of legitimacy of political institutions.” And he added, “Everyone that you put in the presidential seat will fail catastrophically.”

Yet Núñez still retains some faith in Boric. He also accepts that some compromise is necessary. “With power you need to moderate, so Boric needs to change his style a little, but I think he and his coalition are doing the best they can.”