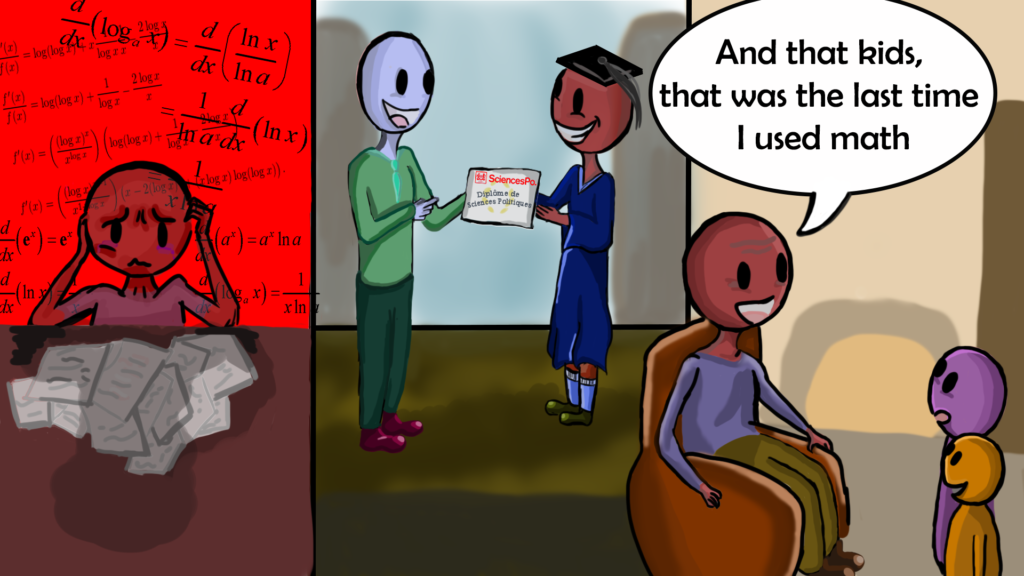 Equations, derivatives and vectors are things most students thought they left behind after finishing high school, and who can blame them? After all, aren’t we in a Social Sciences university ? Yet students are still required to take a Math class that is worth 3 credits during the first semester of their first year.

Why are they taught in Sciences Po ?

It might not seem like much and most people might think that just because Math is not as important as History or Political Institutions it must be easy, however through Yik Yak posts, complaints in the Glass Hallway or constant help asked on the SciencesPo Trade page, it is undeniable that students are struggling with their Math classes whether introductory, intermediate or advanced. In fact, what most students have observed is that the level they chose didn’t matter that much because they were studying the same things and for those who have not studied Math for the last two years, it was indeed frustrating.

When asking students if they felt that Math was useless in SciencesPo one of them answered: “I think math in general is a useful thing to have and it’s more practical than a lot of people would think, especially for Economics and other social sciences that use a more empirical or quantitative approach. However, if people want to go into Law then it’s unfortunate that they have to take it” In terms of the way it is taught, another 1A explains “I feel like it’s subpar. There could be a lot of improvement concerning how it’s taught, but in terms of requirements to take it, I think it’s justified.”

A subject that is important abroad

One of many peculiarities concerning Math on campus is that failing students don’t need to retake it at the end of the year like they would do for any of the main courses. One could argue that if it isn’t that important, why even take it in the first place? However, for their third year students can expect partner universities to still pay attention to their Math grades which isn’t the best news for all of us. This is even more serious for certain dual degree students that are also expected to validate a certain level in Math in order to pursue their education in their already-chosen school.

Multiple encounters with 2As showed that unlike this year’s 1As, they didn’t have to take a Statistics class during the second semester which was a huge relief for a lot of them. All these changes have been implemented with no justification from the administration which means that no one knows the reason behind this new curriculum. A look at the Statistics’ class course description, might give us an idea regarding its necessity. It is indeed applied to the Social Sciences and can be related to the Sociology field research all 1As have to complete this semester. However, this only constitutes a shot in the dark and no explanation from the administration was given.

Needless to say that this equation is one with many unknowns and no one has managed to resolve it.. yet.