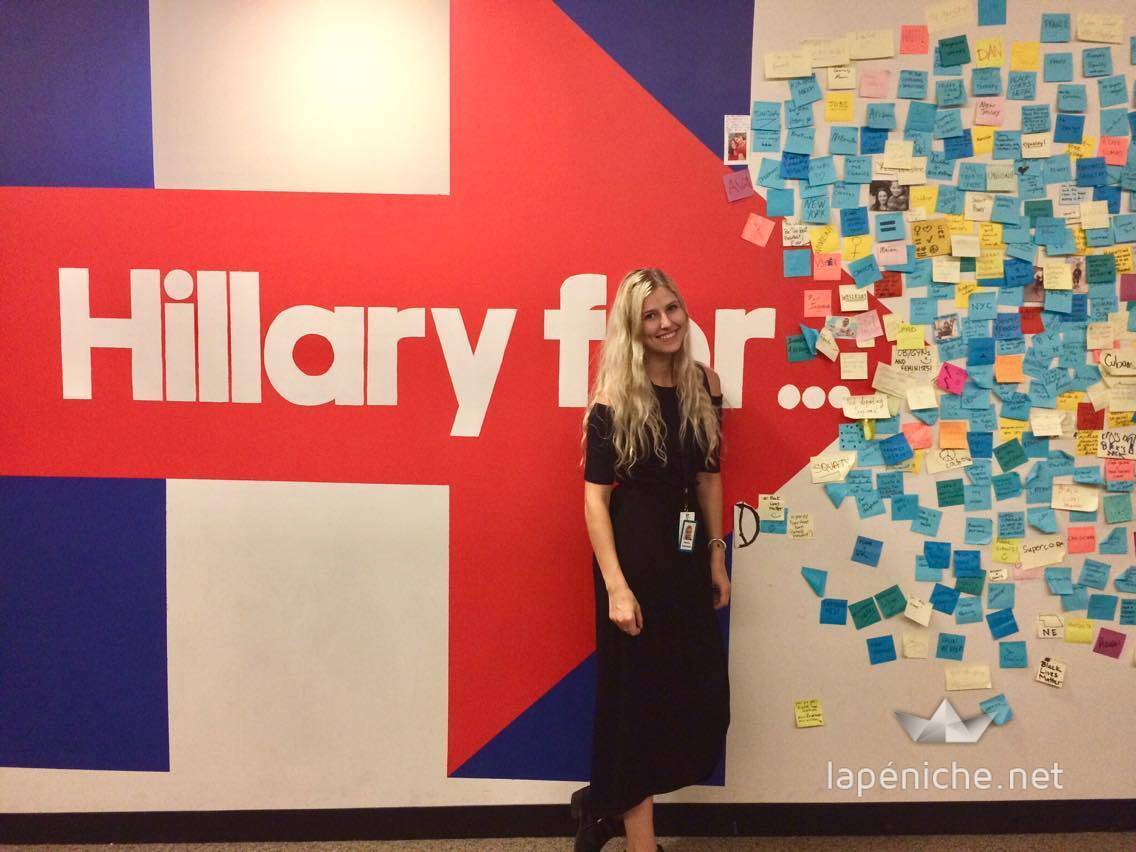 Monica Robinson is a student at the American University in Washington DC and comes from Bozeman, Montana. But, she has not quite the average student’s daily life : she is an active member of Hillary Clinton’s campaign. And as if her path was not already quite unique, she was also elected last July as a delegate for the Democratic Party at the Convention. At a time when in France or in the US, the youth’s vote is at stake and when our generation has a hard time finding its place on the political scene, La Péniche thought that it would be a rewarding and refreshing testimony to have a young woman’s intern point of view of the controversial American elections.

“I have always been invested in female candidates”

When we ask Monica how on earth she managed to be part of Clinton’s campaign, she giggles and says that she cannot completely say everything as the campaign is not over yet. Still, her interest for politics has always been part of her personality. In the cute mountain town where she used to live, she has always been involved with her community’s life. She was an active member of Project X^2 a feminist club in her school. Therefore, studying politics and the female role part of it became just something obvious. From her natural jungle in Montana, Monica embarked herself in the jungle of concrete that is Washington DC. As an American University student, she’s followed classes really close from the ones in Sciences Po : international relations, political sciences and so on. Her majors were politically focused without a single doubt.

“Women in government are really important to me”

But Monica did not only learn politics on the benches of AU and decided to quickly confront herself with the US political scene: her internship with the senator Elizabeth Warren was a turning point in her career.  She had the chance to work at the Senate and embrace the reality of the American political daily life. Working with the progressist senator truly made her realize how she was willing to leave a huge space for politics in her life.

Moreover, the US boundaries did not stop Monica’s ambitions: her semester abroad in Amsterdam, where she researched rigorously the women’s reproductive rights and abortion was another rewarding experience for her: her feminist beliefs have remained truly attached to her vision of politics.  Monica has always truly felt attached to female political figure who are truly meaningful according to her.

“Why aren’t women running to office that much?”

She realized the fact that only 20% of Congress is composed with women implies that there is something truly wrong with the system. The lack of women willing to run for state is without a doubt questionable. It is why, Hillary truly became for her a real “symbol”. She’s been facing a lot of criticism concerning the fact that people are truly attached of the candidate’s gender. But as Monica points out, there is, at the end, nothing wrong with “women wanting to be represented in the highest level of power” and that Hillary Clinton, at the end, embodies truly these women’s hopes.

Back to the USA, Monica did firstly an internship in the local campaign in Bozeman during the primaries. She did the campaign job from the beginning to the really, really end. From door-to-door work to phone calls, “living the campaign behind the scene was an incredible experience”. In order to be elected, she had to run : from the Countee Election to the State Convention and the National Convention, she achieved all the steps by participating in what she calls “the  backbone of the campaign”. With all the people in the shadow she worked actively to support her candidate with a lot of time spent on field work. The high proud gained from “making a difference” was definitely uplifting for Monica. And these long hours spent on the campaign, something definitely “challenging for a student” finally paid with her election as a Democrat Delegate.

“I knew that at this moment, history was made.”

The Convention was for sure one of the greatest moment Monica faced during her brand new political career. This special event took place this past July: all the elected delegates like Monica, who was not involved at the Campaign at that point, had to vote for the nominee in the Democratic Party. Seeing Hillary Clinton nominated, hearing her acceptance speech, witnessing this event: at that point, Monica knew that “history was made”. Monica recalls on how this moment was “something unbelievable to watch happening in front of my eyes”. In fact, 100 years before the Convention, the first woman in Congress, Jeannette Rankin, was elected by the state of Montana. This might be a coincidence for some people, but is a  real symbol for our young delegate, who decided to get involved to the campaign afterwards.

So far, working for the Campaign has been extremely intense: not only she had to face the harsh moments and tensions of this crazy US campaign, but she mostly had to solve the main issue that both candidates are facing: “getting people to vote”. At the HQ in New York, Monica still does what she’s always did: a lot of field and supportive work with major events such as public fundraisers and so on. After the election, next Tuesday, Monica’s life will, one way or another truly change. Still, she has her plan for what will happen after graduation: still getting involved with campaigned work, helping women to get more involved with the political scene and so on. She truly wants to focus on more social based work, such as helping low income families with their taxes and finances and working in favor of women’s health in reproductive rights, with the Planned Parenthood for example. But for now, #ShesWithHer and is recklessly active in the campaign in NY, until its very end coming up next Tuesday.