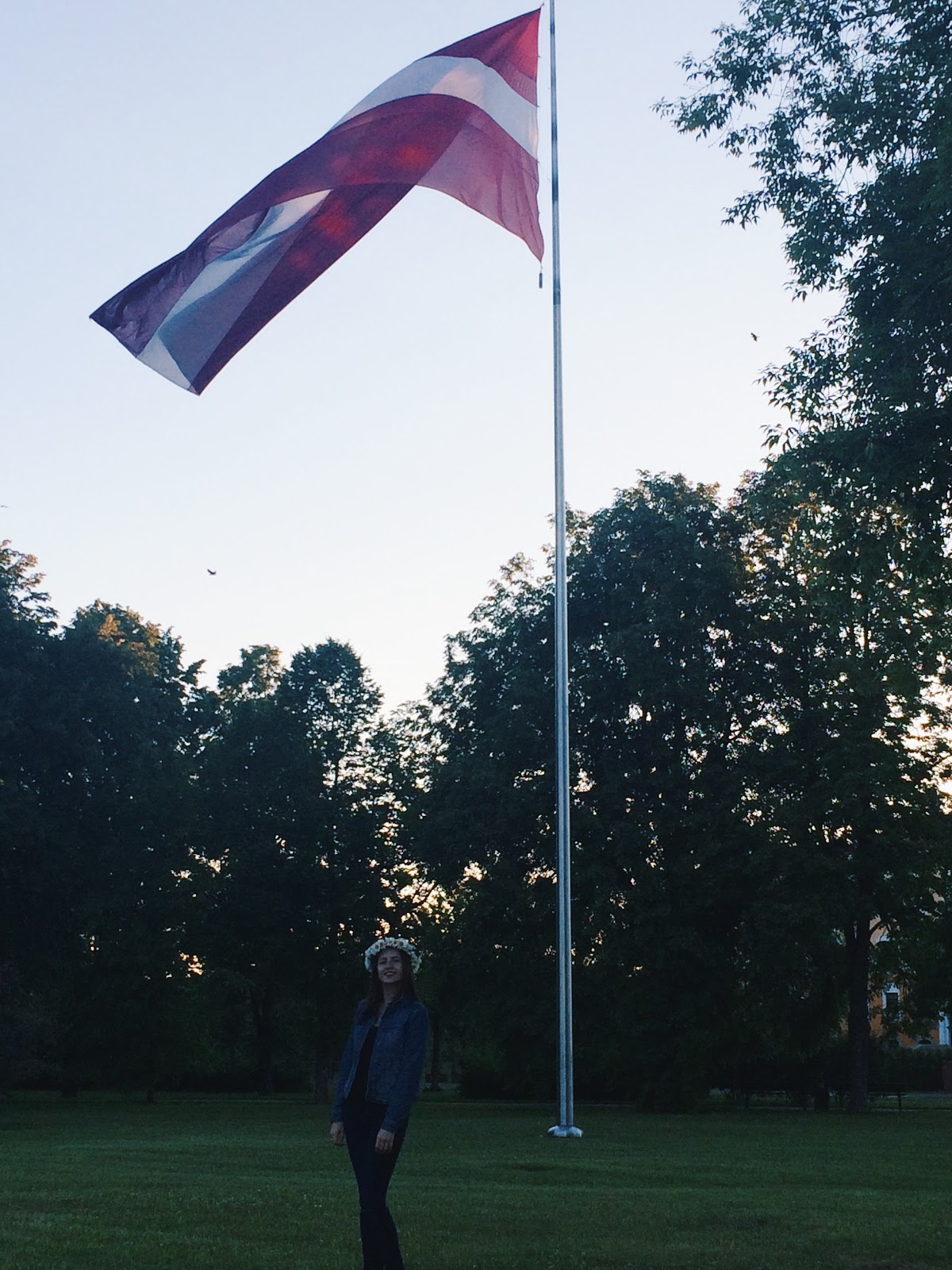 There are not many Latvians in Sciences Po. At least not in the bachelor courses and not in Paris. At least not that I know of. During my first month here, many students that I meet have asked me endless questions about the country where I come from – what language do we speak, what’s our religion, what’s our history and why should people recognize us. If you ever meet me or any other Latvian, be prepared and know these facts about Latvia in advance!

1. The middle one of the three Baltic countries

As many of you already know, Latvia is located in the Eastern/Northern part of Europe and it is one of the three Baltic states. The problems begin when one is trying to remember which one is which – Estonia, Latvia and Lithuania. To solve your problem once and for all, Estonia is in the North, Latvia is in the middle, and Lithuania is in the South. Latvia is located in the middle; therefore, we are blessed with having close relationships with both of our neighbouring Baltic states.

Yes, many Latvians do speak and understand Russian, but that is not the main language Latvians use and most certainly we do not want this language to be our characteristic. As we are a Post-Soviet country, of course, there are many Russian speaking people in our country, but it is not our main language. We speak Latvian, which is in a quite unique language (Baltic Languages), and it it is similar only to Lithuanian. Also do not mix both countries – although the names are similar and the countries are located next to each other, they are different.

3. There are less than two million Latvians

To be honest, I felt quite honored when one of my coursemates asked me how many Latvians there were, and was surprised when I answered that there are less of two millions out there. There is a reason why so many of those who meet me say that I am their “first Latvian”. There are few of us and although we are not proud of the small number, we are proud of representing our country. And we have done great things so far – Latvian-born tailor Jacob Davis created jeans and established the worldwide known brand of Levi Strauss, we are proud of our painter Mark Rothko and even recently our own Jeļena (Aļona) Ostapenko won the Roland Garros tennis tournament in 2017.

4. Lutheranism, Catholicism and Orthodox – we have different religions

When being asked about the main religion in Latvia, one cannot respond with one word only – there are three main religions in Latvia, Lutheranism being the most common one (25-35% of Latvians), Catholicism the next one (20-25%) and Orthodox being also quite popular (18-22%). Fun fact: Lutheranism, which is a protestantism branch, is the most common in Western and Central Latvia, and Catholicism is popular in Eastern part of Latvia, also known as Latgale.

While it looks like French people like to protest a lot, Latvians prefer to sing. Moreover, once in every five years in summer the whole nation gets together in a big Latvian Song and Dance Festival, which gathers more than 30,000 participants, including many kids. Almost every Latvian kid is involved in folk dancing, choir singing or another festival-related activity. Furthermore – every other five years there is a special Latvian Song and Dance Festival for youngsters.

6. From Art Nouveau to wooden buildings – you can find it all in Riga

If you like Paris due to its amazingly artsy architecture, you should visit Riga as soon as possible! Our capital is famous with its Art Nouveau architecture which can be seen throughout the whole city, but is the most concentrated in a part of the capital called “Klusais Centrs”. The block is decorated with Art Nouveau elements, figures and French-like architecture, and it is always full of tourists who are willing to capture at least a part of the amazing beauty the houses have. Moreover, Riga also has a lot of wooden houses, making it the only European city where so many wood buildings that still exist.

7. We use Italian when we meet or part

Remember when I said we speak Latvian? That’s still true but instead of saying “hello” and “bye” in our own language, it is a common habit to use “čau”, which sounds very similar to “ciao” in Italian. Although Latvian and Italian border is nowhere to be found, this habit still persists and usually makes my Italian friends laugh. However, that is the only Italian thing we say.

I personally am only 1.68 meters and I still feel quite tall for Parisian standards. Guess what – back in home I am one of the shortest among my friends. Latvian women are considered to be the tallest in the world, the average woman being 1.70 meters tall. It is also said that Latvian women are very pretty and can be considered some of the most beautiful women in the world. Cannot argue – you just have to come to Latvia and see for yourself.

9. Relatively new country – only 100 years to date so far

The Republic of Latvia was founded on November 18th in 1918 and we still celebrate this date every year, last year marking our 100th anniversary. However, at first Latvia was only independent until 1940 when it was added to USSR and remained a part of it up until 1991. Although we are super grateful for this regained independence, we are more keen on celebrating the 18th of November. And we also include the years in the USSR when counting the age of the country; therefore, our country will turn 101 this autumn, not 50, and not 28.

10. Home to the first Christmas tree

Have you ever looked at the Christmas tree that you decorate each year and thought to yourself: why and since when do we do it? Latvians have an answer to that! In 1510, the first Christmas tree was decorated in Riga. The local merchants danced around it and later on set it on fire. Don’t worry, we don’t do that anymore, but even now every Christmastime Riga is full of various decorated Christmas trees.

If we have to name one sport we are really passionate about, it’s hockey. In 2019, our men’s hockey team ranked 9th, according to IIHF, and it is in Latvian blood to follow every European and world championship, and the Winter Olympic Games. Always feels good to see how a small country can compete with the world champions and other big countries, whose population and resources are much, much bigger than ours.

Every 23rd of June, Latvians go to countryside (okay, we do that throughout the whole summer, but it is almost mandatory in the 23rd of June) and celebrate Jāņi or Midsummer celebration. Although we do have many guys called Jānis and this celebration is a great way to celebrate the name day, traditionally the idea behind the celebration is to wait for the sunrise during the shortest night of the year. The celebration involves consuming a lot of beer and cheese with cumin, singing Latvian folk songs, doing some fortune telling and sitting around a bonfire. The bravest ones can even run and jump over the bonfire.

Yes, you read it right and I will never stop enjoying how much this surprises people. This tradition tends to depend on the religion and region you are from, but the idea behind this weirdly named festival is that once a year in summer all families go to a cemetery and remember their beloved ones who are not in this world anymore. It is a big celebration and it takes place in each cemetery in a different week, so that you can manage to visit several cemeteries and meet different relatives. After the silent moment or just gathering together in the cemetery, the relatives usually tend to go to one’s house and celebrate some more.

14. The widest waterfall in Europe

Latvia also has a wonderful nature – more than 50% of the territory is covered by forests, and we also have beautiful beaches and meadows. But that’s not it! We also have the widest waterfall in Europe – Ventas Rumba. It is 249 meters wide, and during spring floods it sometimes reaches 270 meters. It is possible to walk over it and to swim in it; therefore, the waterfall is a quite popular attraction during summers.

But Latvians do not stop at what has been obtained from our ancestors or nature. We are continuing to invent and create. In Europe, we are the third entrepreneurial hotspot, right after Sweden and Estonia. Moreover, according to World Economic Forum, Latvia is the best when looking at the total early entrepreneurial activity. And we have very fast internet speed – we are 16th in the world!