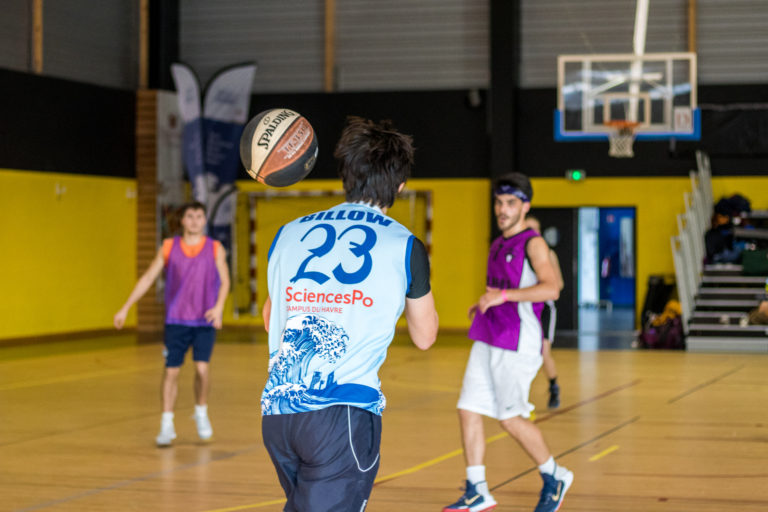 Once again, the Euram and Euraf teams proved to be strong competitors in the various basketball and volleyball matches against Sciences Po’s Nancy, Le Havre, and Poitiers campuses. Today’s matches were held inside a sports complex, providing warmth and an even more concentrated team spirit. The atmosphere was noteworthy as always, with Poitiers forming a conga line, Le Havre’s K-pop dance party in the middle of the court, and the fierce competition between Nancy and Euram.

A particularly intense face-off between Nancy and Euram

The matches began at 9:00 a.m. with a back-to-back performance by the Euram basketball team. Louise Ortlieb, second year student and the team’s co-captain, stated, “offensive was really strong in the first game and good teamwork. The first half of the match against Euraf was great, but in the second half we could feel ourselves losing our concentration.”  Through excellent teamwork and strong numbers, the Euram team achieved victory against Poitiers with a score of 33-11 and against Euraf with a score of 29-12. However, this was just the beginning of a long day of matches for the team. The afternoon games against Le Havre and Nancy were the most physical and intense games of the WEIC tournament. The Le Harve match was a nail biter, with Le Havre gaining an early lead and maintaining it for a three point victory against Euram. But the match of the day was the annual Nancy v. Euram face off. The Nancy and Euram teams lined the court, and there was a deafening silence throughout the fierce match. Nancy would unfortunately beat out the Euram team with its precision and strong offense.

Isaac Greenman, second year student and team co-captain, expressed his emotions towards the losses, “I’m still really proud of the team and hope that we will exploit our weaknesses for victory in the future.” He continued with a critique of the Sciences Po administration, stating, “it’s extremely difficult to create a winning team with no infrastructure, and just once a week for two hours in an indoor gym. In a ‘world class institution’ I find it pitiful that we can’t contribute more to our sports”.

« It’s extremely difficult to create a winning team with no infrastructure, and just once a week for two hours in an indoor gym. »

The Euraf basketball team had a decisive 15-point win against Poitiers and fought a hard battle in the other matches. The support was as present as ever, with drums, horns and dancing for every point the team scored. Despite the small size of the Euraf community, the team’s spirit was the loudest and the liveliest. Chahinese Baghdad, a Euraf basketball player commented, “it’s such a great spirit on our team, and I’m so happy to be able to play and be a part of it.”

« The Minicrit will be something to train for »

The Euraf volleyball team, despite its adept coordination, did not win any matches.  A Euraf second year player commented that it was due to Euraf’s lack of numbers, since they only had six people and couldn’t substitute anyone throughout the day of intense matches. Despite the fatigue, Euraf’s players maintained a smile through it all. Florian Bobin, second year Euraf and a key supporter of the team commented, “it’s a time to see where we are at, and the Minicrit will be something to train for. We are proud of what we did, and we want to continue our performance from the Minicrit last year.”

The Euram volleyball team was incredibly successful due to its great depth and communication. Earning a victory against Euraf, Le Havre, and Poitiers, Maria Gillin, second year student and member of the team stated, “it all comes down to Nancy. Nancy is also going into the final match undefeated. The Nancy and Euram volleyball game is the most important of every WEIC, as it always goes back and forth every year. We will need to rely on our technique and endurance, since Nancy also has our skill.  The most important is the cohesion of the team, we need the whole team to be positive, and keep our heads up. It is cohesion that will bring us ahead of the game.” The game was raging with emotion of the Nancy v. Euram rivalry. However, Euram suffered their first loss of the day at the hands of Nancy.

The second WEIC, held in March, will be more of an indicator to see where each team is at going into the Minicrit. As the Minicrit is being hosted by Reims this year, there is a greater amount of pressure and motivation for the teams to claim victory across the board- the first WEIC is just the beginning of the war to come.