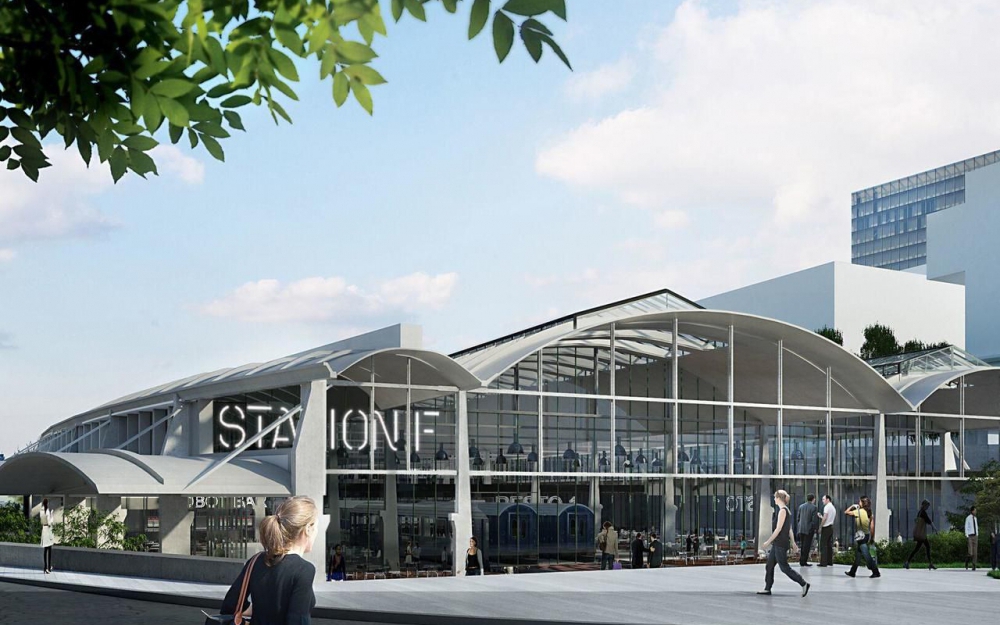 Halle Freyssinet just looks like one of those glass and metal 1920s train depots that are being renovated all over Paris. The only thing that sets it apart in the quiet 13e arrondissment, are the words “STATION F” in cubital, neon letters on an elegant facade. Until a few years ago, the building was abandoned. But today, walking past the sliding doors of the refurbished, 34,000 meters squared start-up incubator feels more like 2020.

The curved, industrial glass and concrete ceilings, and old shipping containers-come-meeting rooms give the air of a practical business environment, but it’s the little things that give Station F the edge over any other faceless office building. It’s the acid green triceratops at the entrance. It’s the confusing sculpture in the main hallway that looks like a huge pile of multicoloured play dough.

Paris, an opportunity to build your career ( and yourself )

It’s the kaleidoscopic beanie bags that fill the meeting room where Marisol Herrera, 39, recalls what led her to the biggest start-up incubator on the planet. CEO of the Mexican sustainable travel start-up Totonal Viajes, Marisol is one of the 70 winners of the French Tech Ticket competition that saw 3,000 candidates from 115 countries contend for a spot in one of the country’s 41 accelerators – and a €45,000 of funding.

The French Tech Ticket is the final addition to the French Government’s efforts to turn Paris into Europe’s Silicon Valley. Brexit has crippled London’s chances of remaining the European business capital for much longer, the United States have rediscovered protectionism, and living costs are rising for businesses in California’s tech hub. France sees an opportunity, and it isn’t planning to sit on its hands. From 2014, the country has started introducing special tax cuts for innovative companies, and established a fast-track procedure for foreign start-up founders and investors to move to the country. These moves have attracted growing interest from venture capitalists, and global talent is now coming to the ville lumiére for more than just a weekend getaway.

“Paris means the opportunity to build your business, but also to build yourself,” says Marisol dreamingly. But of course, she argues, it doesn’t come free of trouble. Zigzagging between mountains of paperwork and adjusting to life in a new city, what holds many of the newly-arrived entrepreneurs back is the language. Marisol was happy to learn French, seeing the perks of having access to a world-wide Francophone market, staying comfortably incubated in the capital — but she is an exception.

The opportunities brought by the French Tech

Many other winners of the international competition rather resent having to learn French to do business in Paris. Oskars Gauks, 25, is one of them. He moved to France in February from his native post-Soviet Estonia. Sorry As A Service, the innovative Tallinn-based customer service platform he’s been working for since 2015, initially opened a second branch in London for the immediate access to the English-speaking market that offered. But Brexit hit, knocking value off the pound, and Oskars’ company found itself with a 10% loss in investments. That’s when they felt it was time to look to continental Europe to diversify their client base. Oskars was sent to France to test the waters before the company applied for the French Tech Ticket. “Before I would have said that the capital for tech in Europe was London, and maybe Berlin, now I can see and feel that Paris is catching up,” he says.

Outside the window of the meeting room, the world continues to spin. Past the transparent wall that separates the public esplanade from the self-labelled “Creative Zone”, thousands of entrepreneurs roam the green (or, well, grey) fields of Station F hunting for unicorns amongst the open-air desks, Skype stations and foosball corners. On the elevated walkways that run along the sides of a spacious common area, giants such as Facebook, Ubisoft and Microsoft have their own workstations. Station F seems to be the perfect symbol of France’s ambition to become Europe’s leading tech hub.

« If that’s the future, they’re just looking at it – and walking backwards. »

But social entrepreneur Hector Barraza, newly settled at his desk in the incubator’s Numa section, believes France shouldn’t take inspiration from the Valley. “All the start-ups here are trying to emulate the Silicon Valley of ten or fifteen years ago, but that’s gone! That’s over! It was great, but it happened already: it’s ended now,” he says. He stands up and steps back through the desks, pointing at an undefined point in front of him. “If that’s the future,’ he says, ‘they’re just looking at it – and walking backwards.”

What the French entrepreneurial ecosystem needs to learn before it can rise to the occasion is strikingly simple, he feels. Start-ups working in France should be focusing on the needs of the country and its people. That’s what inspired him and his colleagues to expand their inclusive entrepreneurship education program, Collective Academy, to help refugees in France all the way from Latin America.

More and more foreign entrepreneurs like Marisol, Oskars and Hector are setting their sights on Paris. And France, eager to welcome them, is proving to be fertile ground for the businesses of tomorrow.