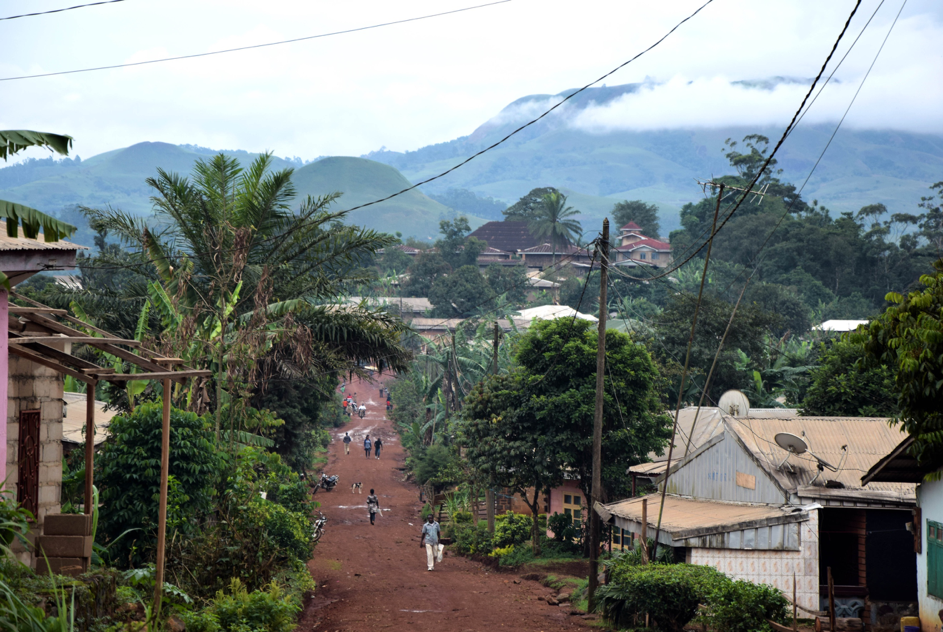 The world is so small up here. The towns, rivers and mountains pass by. They look all the same. It is as you would click on miniature mode on your camera. But this is real, so real. Lavenir, a 27 years-old Cameroonian, has chosen a window seat so that his eyes follow the changing patterns of vegetation on his flight from Germany to Cameroon. Right now, the slim young adult simply let a frail smile pass his lips. For the first time, he returns to his home country since he left in 2015 to study his Master degree, like a few thousand Cameroonians do as well. But he is only staying for a week until he flies back to Germany. The moment to quit Germany again, for that time definitely, has not come yet.

The return of the prodigal son

As he tells me on the telephone, he returns with mixed feelings : “I am happy to see all my friends, to eat my favourite dishes, to be back in my room where I was living throughout my boyhood.” But indeed, there could have been a better reason to take a flight to Central Africa: A couple of days his aunt died. As the young student got that sad information, he did not hesitate a second. A few minutes later, his flight was booked despite the high costs. “She had raised me since I was ten years old. I was always close to her. She is also my mother. I could not stay in Germany in that sad moment. I wanted to be with my family back at home”. Where do you belong to if you have two homes but one decision to make?

« I will leave Germany after my studies. I am sure about it ! »

Lavenir has been asking himself this existential question throughout his past few years. Since he arrived in the country of roast pork, Oktoberfest and an iron Lady governing for more than a decade, his decision to return to Cameroon one day has been continuously swirling in his mind. “I will leave Germany after my studies. I am sure about it!”, he would say to himself. At the airport, his family is already waiting for the plane to debark. And then the moment has come. The prodigal son and his dependents are lying in each other’s arms. They welcome him with a bag full of fresh peanuts that nowhere tastes as good as in that tropical country. They are curious. They are curious to know how it is living in Europe. A sweet surprise, a tearful home-coming.

A laborious path to central Europe

His short stay in the grass fields of the Western highlands near the border of Nigeria is like a trip down memory lane. A foretaste of future? The air is pure. Rainy season is about to end. At the corner, right down the street, children play football and young mothers holding their babies on their arms sell fresh fruits. That time he can only spend a few days in his beloved homeland, “but I am also happy to return to Kaiserslautern to have my normal life, my daily routine. Even though I miss my family and the delicious African food that I still prefer”, he admits. At the end of the week his flight carries him back to his home away from home, within half a day, via Addis Ababa. A world tour XL. He will probably experience the same journey again in the upcoming years with the slight difference that there will be no way back.

Lavenir is one of numerous Africans who leave their country to study in Europe. In Cameroon alone, one to two thousand young high-school graduates and Bachelor graduates apply each year in Germany. The central European country enjoys a good reputation among adolescent Cameroonians. At a time when millions of refugees from war zone arrive in Europe, the procedure to get formally accepted as a student-to-be is complicated and selective: Not only a high language level and a letter of acceptance from a German-based university has to be proven, but also a minimum bank balance of several thousand euros and contacts people already living in Germany are demanded when applying for visa. It is not uncommon to wait a dozen of weeks to get an appointment at the German embassy in the capital Yaoundé. If they succeed, odds are pretty good that their personal path of life end up in a Western socio-economic setting.

The impact of the « brain drain » in Cameroon

“The question is to what extent young African students can put a service to their home institutions. Many policy investigations showed financial gaps for African countries caused by Brain Drain. These people leaving for Europe produce financial income but they pay taxes abroad”, as Dr. Cristina D’Alessandro, senior fellow at the centre on Governance at the university of Ottawa has analysed in her case studies. But not only government revenue is missing, but also know-how in various fields: “Professionals lack in certain disciplines like doctors. They are needed in their home countries”. But there are also those ones who prefer to return to their home countries after their studies. Lavenir is one of them.

« I was really surprised to see poor homeless citizens in such a wealthy state. »

Lavenir has settled down in Kaiserslautern, a modest medium-sized town nearby the Vosges. “It is also because I never had any too optimistic illusions about how life would be here”. In contrast to Cameroonians, he knew that life can be as challenging as in his home country. “On Mondays, I am doing some research about where I can work next. I like to go my lectures at the university. But to be honest – my occasional jobs are even more important.” Lavenir cannot enjoy a scholarship as some of his German fellows do. He has to work to finance his studies, at least two or three days per week. Whereas other students party Saturday evening, Lavenir spends the whole day working in a factory. The rest of his time he has to do his exercises for university. After all, he has little time to have fun with his friends. But still he never misses an opportunity to attend church on Sunday – a tradition that seems like an anachronism in a mostly secularised western society. Lavenir did not expect this society to be so divided: “I was really surprised to see poor homeless citizens in such a wealthy state”.

His friends support him. They are always ready to listen to his troubles: “It is not that easy to find jobs in this region. The neighbouring towns are small. Sometimes you only get temporary employment. With the money I earn I can’t help my Cameroonian family financially as I thought in the beginning”.

« Repatriation » and the collapse of the European dream

Karim does not work at all. He does not have any choice than to return. In Germany, he is not allowed to work. His cheeks are soft. His eyes suggest the fatigue of being in a dead end. The 40 years old father has been separated from his children in Benin. For almost 15 years, Karim has been living in a tiny town in the east of the Republic. His German is poor. Most of his time he spends at home. Karim wasn’t granted the refugee status when he sought for asylum. He is just state-tolerated – since more than a decade: “Since 2004, I am living in Germany but I never got my permission to work. So I am just eating and sleeping. I really want to work”. His children are waiting for him – in Benin. They will soon be able to welcome their father because Karim decided to leave Germany. He had to admit to himself that there is no reasonable chance that anything changes. As Karim got to know that his personal decision to leave voluntarily is even financially supported by the German state, it was clear that there is no holding back. “They give me 2500 euros within the next months as soon as I’ll arrive in Benin. I take the money to start a motor taxi business. I want to help my family.”

Social welfare organizations like Caritas are in charge on consulting returners and providing aid. There are more than 150 of those networks mandated by the International Organization of Migration. Only one out of seven returning refugees has been going to Africa or to the Middle East. In 2016, the German state subsided those so-called Reintegration and Emigration Programmes for Asylum-Seekers in Germany (REAG) and Government Assisted Repatriation Programme (GARP) by 10 million euros. In contrast to the expenses public and private institutions spent for incoming refugees, this is rather a little contribution. For 2015 the IFO institute calculated an amount of 21 billion euros. The EU contributes to such programmes via its 3,1 billion-fund AMIF.

« Start a project back in my own country »

The highly educated elite that studied at least partly abroad, has good chances to find jobs back home – for Dr. Cristina d’Alessandro a reason to be quite optimistic about the next years for Sub-Saharan Africa: “Cameroon high level universities are improving decisively; the question is raised how much they are capable to reabsorb the brain drain. But you have a variety of institutions that are more and more internationally competitive. As much as the political situation improves and also the quality of life, I am confident that the brain drain will come back to its country.”

« As much as the political situation improves and also the quality of life, I am confident that the brain drain will come back to its country. » Dr. Cristina d’Alessandro

Lavenir will return as well. But the time hasn’t come yet. First of all, he aims to finish his studies in Germany and stays so long: “Five years after my graduation I would like to return to Cameroon. I think it would be good if I start working here a bit for a few years to acquire experience. But then I want to return. I want to start a project back in my home country”. There he will belong to the “privileged ones”, as he calls himself. The privilege to study in Europe is followed by the duty to put into practice what you have learnt some thousand miles abroad.

Such a project has been already completed by two other Cameroonians who studied in Germany in the 1990s. Then they returned and started their business. A business that is called: « Educate the generation of tomorrow ». Morene and Chief Charles Morfaw opened up a primary school and a couple of years later a secondary school as well. The institution based in Lavenir’s home town Dschang is regarded in the whole region as its students perform extraordinary well in the common final exams.

On Sunday, they all go to church in Dschang. The service takes two, sometimes up to four hours. Here, life is different. Back in Germany, Lavenir turns on the television. Merkel and Schulz used to smile to each other. Now they have their common point in opposing towards the right-wing party that entered the parliament.

Lavenir could not vote last Sunday. But he noted that there is a wind of change. Immigrants’ issues are causing tension and harsh cleavages inside the society. And even ten percent for the right-wing party in Kaiserslautern are worrying, but still no reason for Lavenir to rethink his plans for the next few years. His home will be based somewhere in the westernmost corner of Germany.