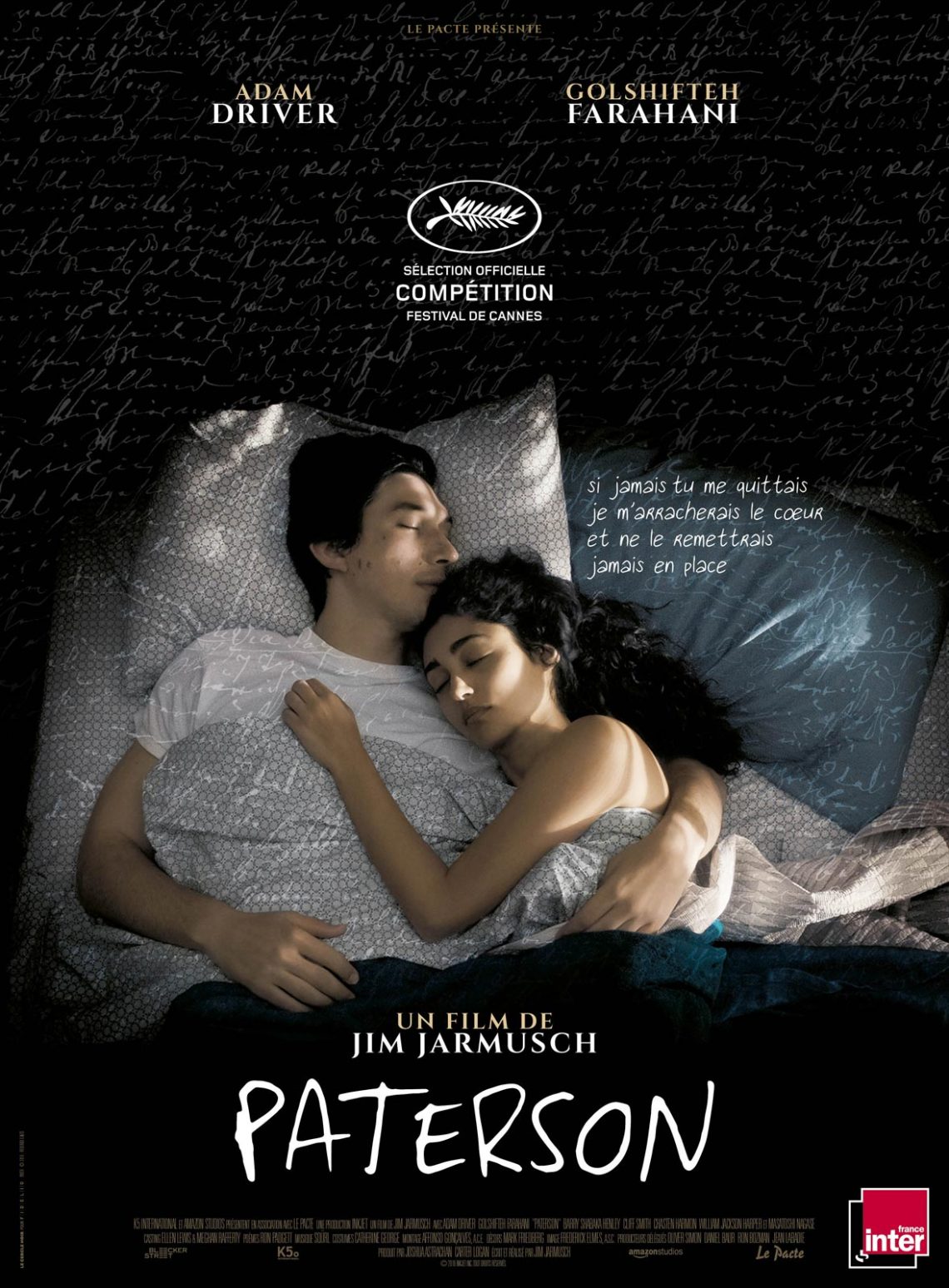 As the Latin Quarter Filmothèque in Paris begins its Jim Jarmusch retrospective, I thought I would take the time to go over one of his most profound and endearing works, Paterson (2016). I strongly recommend any existentially-challenged individual to go watch this film.

Adam Driver plays the role of a bus-driver, Paterson, who spends most of his free time writing poetry in the city of Paterson, New Jersey. Paterson is a small city out of which literary giants such as Allen Ginsberg and William Carlos Williams emerged, and it is this magic sentiment derived from this knowledge of all the well-known and talented people that come from Paterson that seems to inhabit its streets. He lives with his partner Laura, played by Golshifteh Frahani, who stays home and fills it with her whimsical and joyous aura. As Paterson incessantly yearns for poetry to express the vibrant and wondrous sensibility with which he sees the most banal elements of daily life, we follow his life for a week. Displaying no lofty goals for himself, he is nevertheless confronted by the question of how original his individuality is, the great loneliness of not being understood and the frustrations of daily life.

Jarmusch’s long and symmetrical shots convey Paterson’s humdrum life in a comedic but sometimes devastating way. One of the most salient themes throughout the film is the loneliness of the artist who cannot express what matters to him and why it matters, be it to his partner, who he has not read a single of his poems to. The opening high-angle shot shows the couple sleeping in bed on a Monday morning. Already, one notices the Melville copy on Paterson’s bed-side table and the iPad on Laura’s. While Paterson spends his free time reading poetry and writing, we notice his tacit frustration at his partner’s erratically-chosen passions. It is in these silent moments that Driver excels at conveying the repressed frustration of the spouse, of wanting to support but interiorly despairing at Laura’s care-free joy, while he is intimately possessed by his craft. She decides she wants to be a country singer, believing she might have the right aura for it and purchases a several hundred dollar guitar with Paterson’s credit card. Driver just winces and then smiles supportively. It is this anguish of the artist of being anchored to their grand passion, confronted with a world of individuals who merrily pass from one pleasure to the other. Before his partner’s joy, Driver cannot help but smile, albeit with a shadow over his face.

In what is portrayed as a small town, the greatness of the famous who have grown up there invites us into the beauty of the worlds that live within each and every one of us. On one night Driver stops in front of a laundromat where a man is practicing slam poetry. As a bus driver, he spends his days in silence but also gets glimpses of casual, amusing and sometimes intelligent conversation. As the film progresses, Jarmusch increasingly shapes the metaphor of the town as the banal wonder of the interiority of human lives, which Paterson seems to be alone in trying to capture.

It is this futile but existential value of artistic creation which we tediously assist Paterson in. Near the end of the film, Laura’s dog, which Paterson has come to despise, tears the entirety of his poems to shreds. This moment shows Paterson’s solitude to be ambivalent, as Laura had spent days telling him to photocopy his poems. Through Laura’s character, we find a message of great humanity in Paterson’s humdrum life. That despite his cerebral anomie, he lives with a spouse which understands, perhaps not the poetry, but the importance of his poetry to him, more than he himself. And it is this ambivalence which inevitably seems to spark the little moments of joy in his daily life. That intellectual convergence does not suffice to love or be loved, but rather that what is needed is emotional understanding. This idea of the seemingly futile quality of artistic creation is further compounded by what he decides to do once his notebook is gone. He goes back to see the waterfall which had been his muse, and we realize with a certain awe, that with or without his poetry, the beauty he had been trying to capture perdures and keeps existing in the world regardless. In one scene, still grieving from his lost notebook, a travelling shot follows his eyes as they browse through his books. It is a relatively short stack of books, but one cannot help imagining Paterson comparing his slim notebook to several feet of books. These published works stand as a large wall casting a shadow on all the individuality around it.

This brings us to another great theme of the film, and where the mentioned existentially-challenged individuals might begin finding their solace. Paterson does not show any signs of wanting to be published or of becoming a renowned poet. He is nevertheless confronted to the idea of his lack of originality as a human being. It would be hard to count the amount of twins that happen to walk past him or to ride on his bus during the film. Despite his unsatisfied serenity in life, moments arise when his timid desire of uniqueness is gently challenged by the world around him. Notably, he meets a young girl who is waiting for her mother outside of the bus hangar. The girl is writing poetry which Paterson finds very impressive. He memorizes it and recites it to his partner at dinner. Laura responds by saying that it sounds like it could be his. At an other moment, Laura tells him that his poetry is just as good as William Carlos William’s. His tranquil ecstasy at the little joys in life are what make him this peaceful individual. He nonetheless suffers at not being heard, in a world where the only way to do so seems to have one’s picture proudly pinned on the wall of a local bar.

Frequent shots of Paterson from outside the bus and still, symmetrical shots enclose him in the spaces he lives in, notably his bus. In the eyes of the world, as for many of us, his identity and humanity are assimilated to his occupation. In one of the final scenes, after the tearing of the notebook, he is asked whether he is a poet by a Japanese tourist. He responds by saying that he is a bus driver. At first, this might seem like he is refusing to admit that he is a poet, but in reality he is saying something much deeper. That he is a living human being and that being a bus driver does not inhibit him from living life in the most sensorily exquisite way. The whole film is a grand demonstration of the impressions, love, feelings and observations of the city that this bus driver takes in. There is the idea that an occupation is a description of what one physically does for 8 hours a day, but in no way constitutes identity. William Carlos Williams, for example, wrote poetry while being a doctor. Dubuffet, the meteorologist of the Eiffel Tower who was an artist as well, is also mentioned in the film. In a world where fame is everything, it seems that Jarmusch is pushing us to remind ourselves of what it is that draws us to books and art. Rather than fame or famous people, it is life itself that we can’t keep ourselves from exploring. And life is in us all, no matter our occupation. In the words of Toni Morrison: “You are not the work you do; you are the person you are.” In an era of internships and career burn-outs, it is certainly a very timely message.

What we are left with is this deeply resounding truth of the imperfection of life. How we dream of great things, but often have to accept their limitations. Paterson has to take the dog out for walks every night. This is something that he hates doing but that his partner asks him to do. There are various comical scenes of the dog dragging him in various directions and of it being very stubborn. The dog shows life at its most ordinary and unglamorous. In the words of Maupassant: “Life is never as good or as bad as we think.” It just is. Paterson narrates the closing scenes by remembering a song his grandfather used to sing him, but the only thing he remembers about the song is the line “Would you rather be a fish?” We are constantly frustrated about what could be. This question endlessly occupies our minds. By focusing on ambitious hypotheticals we often forget the rest of the song. In Paterson’s life, the rest of the song is this joyful woman who bakes cupcakes for the neighborhood market and cooks strange dishes with mountains of affection. A woman who does not understand him and yet makes him happy in very unexpected ways. It is in this ambivalence, that the film does a wonderful job at depicting life the way it is, without any answers. Except for the fact that we constantly alter between the wondrous and the humdrum. And that regardless of outward appearances or worldly positions, our ultimate comfort is always the beauty and pleasure that each and every one of us holds within ourselves.