In December I went to see ‘Impressionnisme et la mode’ at the Musée d’Orsay, a huge exhibition celebrating the relationship between art and fashion. Written up on one of the walls was the following quotation: “La Parisienne n’est pas à la mode, elle est la mode.” Fashion and Paris are synonymous; the city and the Parisian continue to inspire designers, artists, and directors, and wandering the capital we are surrounded by style. It is no wonder then that so many museums and galleries here choose to pay homage to the fashion industry, albeit in very different ways.

Paris Haute Couture at Hotel de Ville is probably the most high profile example at the moment, with a huge collection on display. On entering, I was reminded that this is a whole world of technical skill, luxury and ateliers, far removed from the high street, with photos and swatches of fabric to highlight the process involved. I was struck by the old black and white shots of designers’ hands at work which illustrated even more the minute attention to detail that goes into each piece. The result is a hall filled with designs dating from different eras, but all made in Paris. I had a moment of English pride as dresses by Charles Frederick Worth (an Englishman who essentially founded haute couture in the nineteenth century) were on show, but not surprisingly he chose Paris as his location and from then a whole industry has grown. 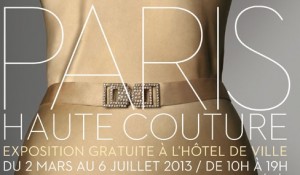 The curator notes Haute Couture has a deceptive simplicity, requiring skills in “tailoring, mathematics and architecture”. Perhaps, but it certainly seems to need patience; one Christian Lacroix dress took 208 hours to create. The beautiful results provide an interesting historical insight too, not just into how styles, materials and inspirations have changed but also women’s role in society, with the transformation from fifties ball gowns (some of my favourite pieces on display) to the short skirts of the sixties. Paris Haute Couture doesn’t just track changes in fashion but also how the previous decades have continually inspired designers, such as Karl Lagerfeld’s clever reworking of a Chanel suit. The exhibition showed too that this is a world of creation and innovation, from the crazy creations of Schiaparelli, who was making shocking pink coats and gloves with claws in the thirties, right up to the incredible crystal studded jacket and mask by Maison Martin Margiela in 2012.

From the history of this industry to perhaps the future of it, last months show at the Gaite Lyrique: ARRRGH! Monstres de mode. If Paris Haute Couture fulfilled all my ideas of the capital with it’s luxury fashion and beautiful design, this exhibition blew all of that away again. It was mad: brilliant but bonkers, and not at all what I would expect from chic and sophisticated Paris. I wandered amongst huge inflatable outfits, dresses that looked like ghosts, mannequins made of fluorescent lights while ‘Obama beach balls’ rolled around the room. This was not fashion for the street; I am still wondering if you can even call it fashion at all, which I think was the point: to mock the industry and the ideals it represents. The exhibits were far removed from everyday life, but perhaps no more so than the world of luxury on display at Hotel de Ville. Both are united by the sense of spectacle and fantasy, but while the first exhibition brought beauty and glamour, ARRRGH! was a haven of strange, experimental and completely original design. It made absolutely no sense, but I loved it.

It certainly gave a different perspective to my visit to Mannequins: Corps de la mode at Les Docks. Monstres de mode questioned what really is beautiful, yet here is a history of the incarnation of this ideal: the model. The exhibition tracks her evolution from inanimate object to star and muse. From the anonymous models of the turn of the last century to the retouched supermodels of nowadays, we see the change in body shapes and social attitudes. Old black and white photos show the model as a mere tool for the designer, but she has morphed into a star in her own right, with a huge commercial value. I was particularly amused (though also slightly horrified) by the sixties documentary on a model agency, where the girls are described as having “belles dents” and are “sold” to clients. Interesting too are the works that highlight the model as a “living doll”, such as Helmut Newton’s eighties shots of Violeta Sanchez and her doppelganger mannequin. The exhibition shows that the models are what give life to the clothes, but it also questions the line between them and a tailor’s dummy; how they have evolved to become well-known personalities but ultimately their role is still that of a hanger.

All three exhibitions are completely different, conveying the huge variety in the fashion industry whether past or present; but what unites them is Paris, the home of couture. Sadly Monstres is now finished, but make sure to catch the other two for a bit of escapism as the end of term draws close.