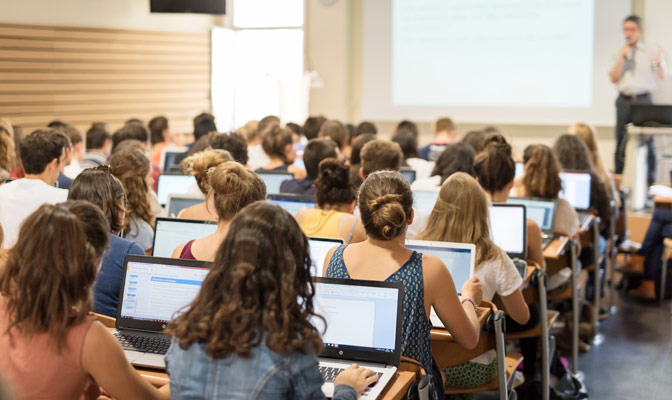 How many times have you found yourself planning out your absences, afraid to skip a class too early in the semester lest you need to « use an absence » later on? How many times have you shown up to class tired, on the verge of a breakdown, with a 10-page paper to write? As with a number of things at Sciences Po, the university’s absence policy is in dire need of reform.

Increasing the part of participation in our grades

Barring lectures, attendance is mandatory in all other classes and students are allowed two « unexcused » absences in classes with 12 sessions, and only one absence in classes with eight sessions (such as many art workshops). Why? The logical reasoning would be that the administration wants to push students to engage with a class, and it is unlikely that they will learn anything if they don’t go. This is a valid concern, but instituting a strict absence policy is not the way to solve it.

Having no absence policy at all would also not be a proper solution. There would surely be classes of 20 students where only three might show up. I would propose making participation a key part of students’ grades. Currently, participation accounts for 10 percent to 20 percent of a student’s grade in most classes. If this were to become 20 percent to 30 percent, that would account for four to six of the 20 points of a student’s grade. This would motivate the students to not only attend class, but engage in class discussions.

If a student showed up to only half of the classes but always made insightful and informed comments, they should receive a satisfactory participation grade.

A rule should be instituted barring teachers from grading a student’s participation solely on how many classes they attend.  This policy would place the weight on the quality of a student’s comments rather than the quantity. If a student showed up to only half of the classes but always made insightful and informed comments, they should receive a satisfactory participation grade. At the end of the day, the idea behind having ‘discussion sessions’ for the core classes is to allow students to discuss the material, and what better way to support this than by making their participation in class key to their grade?

A reform that would bring many benefits

This system would also push teachers to focus more on introverted and shy students who might not participate in class very much. Online forums could be set up, possibly as a replacement to quizzes as a way for students to show that they’ve done the readings. Furthermore, a system such as this one would allow students to not fail classes because of absences. I know countless students that decide to simply fail a class because they know they’ll have more than 2 absences. Many students with mental health issues, which Sciences Po does little to address properly, struggle to attend classes at times. They are put at a great disadvantage under the current two-absence rule.

Many students with mental health issues, which Sciences Po does little to address properly, struggle to attend classes at times. They are put at a great disadvantage under the current two-absence rule.

Under the new policy, they could simply not attend class, or the majority of classes. This would greatly hurt their grade, but if they performed well in other aspects they could easily pass the class.  Lastly, this policy would effectively give the students more independence and control over how to structure our schedules. We are in university now and do not need someone to guide us through it by ensuring that we attend all of our classes.

There are of course other solutions. Many universities in the United States allow teachers to decide on their absence policies, with some allowing students to skip all classes if they wish to do so, and others instituting a strict absence rule. I believe that the solution I offer would work best at Sciences Po. Regardless, one thing is sure: the current policy is not the way to go.